Andy Burnham visits Bolton College for an evening of Celebration 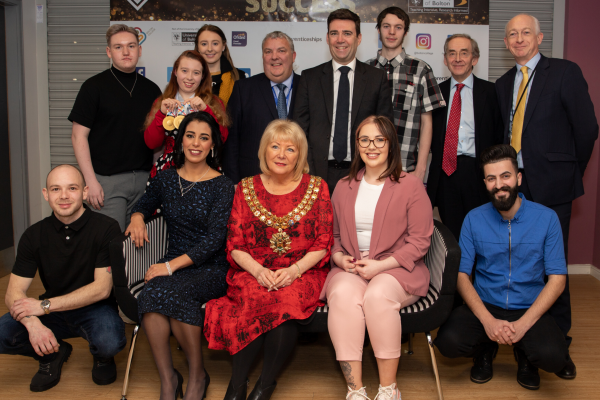 Andy Burnham, the Mayor of Greater Manchester, was Bolton College’s guest of honour at a dazzling ‘Celebrating Success’ awards dinner.

Nine learners from the College, which is part of the University of Bolton Group, were chosen to attend the evening, following outstanding achievements both inside and outside of the classroom.

Their guests and VIPs enjoyed a delicious three-course dinner, prepared and served in the College’s Signature restaurant by Catering & Hospitality students.

Amongst those acknowledged were Caitlin Hesketh, named Apprentice of the Year at the Bolton Business Awards, after swapping law school for hairdressing.

Siham Birbach was invited after securing a place at the University of Bolton to study Adult Nursing, having started on a ‘Find Out About’ community course. An astounding nine other learners from Siham’s class followed the same route, each landing a place at university.

Others recognised on the evening included Callum Stamp, named ‘Best Young Commercial Make-up Artist in the UK’; Ashleigh Emmason, recognised at the Festival of Learning Awards; Kajwan Jabary, who took first place in a national barbering competition; Ben Page, ‘Roofing Apprentice of the Year’; Emilio Boaro, an ambassador for the plastering industry; and a special recognition for Keoghs law firm who, with the College and Bolton Council, supported over 100 local long-term unemployed people to access a sector-based work academy.

Doctor Andrew Roberts, Chair of Bolton College Governors, closed the evening, which was compered by Ian Savage, former editor of the Bolton News.

Andy Burnham, the Mayor of Greater Manchester, said: “Bolton College is putting our region on the map, with its learners being recognised both nationally and internationally.

“It’s such a positive place to learn, and I am so proud of the College, and these wonderful young people. There is so much talent and potential in Greater Manchester, and it’s a joy to see it being celebrated.”

Bill Webster, Principal of Bolton College, added: “I’d like to thank Andy Burnham and the Mayor of Bolton, Councillor Hilary Fairclough, for joining us. We’re incredibly grateful that they were able to celebrate the achievements of our students alongside us.

“I’d like to pass on my congratulations to our learners; their talents know no limits. Without them, and the hardworking tutors and staff in College who support them, evenings like this wouldn’t be possible.

“Special thanks to our Catering & Hospitality students; the dinner they made and served was nothing short of exceptional, as was the service; they really helped to make it an evening to remember.”

To view all photos from the event, click here.