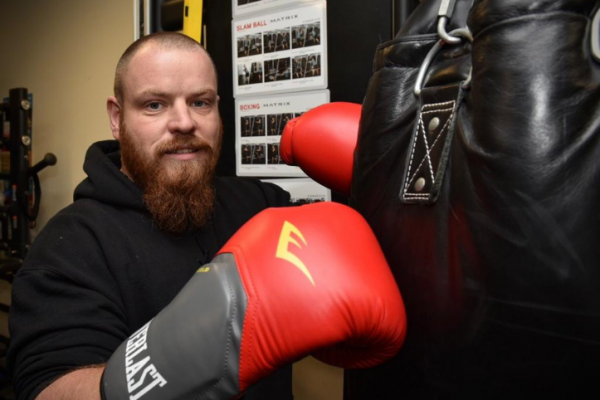 Bolton College student Rob Pinches is stepping in to the ring to raise money for a charity close to his heart.

White Collar Fighter comes to Manchester’s Bowlers Exhibition Centre this month and Rob is turning amateur boxer to raise £1,000 for Kidz2gether, who support children with autism.

Rob was inspired to take part in the challenge by his partner’s daughter Bella, who is on the autistic spectrum.

After receiving eight weeks of intensive training at the JMA Gym in Atherton, Rob will fight one of his training opponents in a competitive bout at the end of the month.

Matched on weight, fitness, ability and age, Rob will go three rounds at the Centre, transformed into a boxing arena for the night.

Up to 40 other fighters will be taking part, raising money for a variety of good causes.

Rob has been juggling his training with studying to be a teaching assistant at Bolton College, which is part of the University of Bolton Group. He also volunteers at Blackrod Primary School whilst holding down a full-time job at Ropetech Access Solutions.

This isn’t Rob’s first brush with boxing; last year his brother Michael donned gloves for the same event, winning his fight - a result Rob hopes he can replicate.

Rob, who lives in Horwich, said: “First and foremost, I chose to do this challenge after seeing the amazing work Kidz2gether do with young people; I’ve seen first-hand the difference they can make to a child’s life.

“The training’s been tough – it’s two nights a week but I’m good with that as I want to step into the ring full prepared, and I’m also doing some solo training. Hopefully all my hard work will pay off.”

Rob’s Bolton College tutor, Stephanie Chapman, said: “Everyone at the College is incredibly proud of Rob, raising money for such a fantastic cause. We wish him the best of luck when he steps in to the ring.”